Homeland Security issues the guidelines allowing US Border Patrol agents to use deadly force against stone throwers, including shooting those on the Mexican side of the border. There have been hundreds of stone pelting incidents, hundreds of abuse complaints to the Border Patrol & countless deaths, including of young people. There has been some litigation for wrongful death but most legal action is ruled invalid in a US courtroom because the victims are killed on Mexican soil. Currently the US Supreme Court is sitting on the case of a young boy shot by an agent in 2010 to decide if his family can file suit in a US court. In the unlikely case the judges will rule in the family’s favor, this would make it easier for others to also file wrongful death suits.

This is 16-year-old José Antonio Elena Rodríguez who in 2012 was shot ten times in the back in Nogales, Sonora by a Border Patrol agent in Nogales, Arizona. The agent said José Antonio was in a group of stone pelters endangering the agent but his family said he was walking home from a basketball game with friends. Getting shot in the back ten times more than substantiates a claim of innocence if not an altogether rabid agent unfit for duty.

The US Department of Justice did allow the family of José Antonio to file suit against the agent in this incident but most legal action is debarred solely on jurisdictional grounds. Just in the six-year period between 2010 & 2016, forty Mexican citizens were fatally shot by US Border Patrol agents from the US side of the border. That’s a whole lot of impunity for a very serious crime according to law enforcement experts & human rights groups.

Why the Mexican government hasn’t screamed bloody murder about this violation of their citizens’ rights indicts its collaboration with the US over border & jurisdictional issues. If the US courts will not allow agents to be prosecuted in the US, what’s to stop Mexico from taking action against them in a Mexican court? Why isn’t it protecting its citizens?

Some of the stone pelters were look outs trying to protect immigrants crossing the border; some were crossing the fence to visit their girlfriends or family (it wasn’t explained how they could be scaling a 50-foot wall & throwing stones at the same time); some were just in the vicinity of stone pelters; others were just doing what boys do in rebelling against unjust authority. Whatever they were doing, the use of deadly force against stone pelters is a crime. With Trump in office, that is not going to get better.
Immigration is a human right. Open the damn borders. 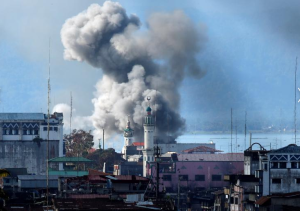 The NY Times had a recent article titled, “Duterte, Focused on Drug Users in Philippines, Ignored Rise of ISIS.” How many deceptions can you pack into one headline? Duterte was never focused on drug users. His so-called drug war was always a war against poor slum dwellers occupying valuable urban real estate targeted for gentrification & development. It is part of neoliberal scorched earth policies which created the slums in the first place from expropriated farmers & displaced farm workers & now wants to clear the slums to build resorts, upscale hotels (like Trump Tower Manila) & shopping malls, free trade zones for sweatshops.

It’s expected that the NY Times, a voice for the ruling elite, would express alarm about the rise of ISIS in the Philippines. Since the Philippines, despite the loud-mouthed vituperations of Duterte, is an essential ally of the US & since Duterte is scheduled to visit Trump in Washington, the NY Times wants to put vigilante slaughter of unarmed civilians out of sight, out of mind so there’ll be no hitch in remilitarizing the Philippines with US weapons. If we fall for it, they have us just where they want us. It’s regrettable to see progressives circulating alarmist media reports about the rise of ISIS in Marawi city on the island of Mindanao without examining the history of Muslims in the region, their struggle against persecution, & the role of the US military which has long been active there–almost certainly to facilitate such a development as connections to ISIS by local insurgents. It’s another instance of ‘if ISIS didn’t exist, the US & Duterte regime would have to invent them.’

Muslims have been in the Philippines, centered in Mindanao & surrounding parts of the archipelago, since the 13th century. Since then they have fought the Spanish, the US military (more than once), the Japanese occupation in WWII, repeated military assaults by successive Filipino regimes & have sustained persecution, massacres, mass rapes. Small groups of oppositionists in Marawi could have gone off the deep end politically & forged associations with ISIS. But one has to examine how that happened & mostly question who arms them. How do they get rocket propelled grenades & high velocity assault weapons (which media claims they have) delivered past the Philippines navy & US special forces deployed in the area? Even if some of the forces of resistance have begun to associate with ISIS, it does not mean the struggle of Muslims in the region is unjustified.

June 30th will mark one year of Duterte’s reign of terror, of death squads & vigilantes gunning down the poor in the streets & desecrating their bodies. Over 1,000 people every month, including teens & small children, have died in this onslaught & Duterte boasts he has no intention of ending it until he leaves office in 2022. It would be a mistake to turn our attention from his crimes against the poor to wringing our hands about the rise of ISIS in Marawi. Is there an operative distinction between Duterte’s death squads & bombers & ISIS?

Media reports that most of the 200,000 to 250,000 residents of Marawi have fled ISIS terrorism but they did not begin their flight until the Philippines air force began bombing the city to smithereens just three weeks ago. If the intention is to take out ISIS, they would not be bombing civilians but cutting the supply of weapons shipped into ports on Mindanao island from overseas.

This photo a an explosion from a a barrage of Philippines air force bombing over Marawi. 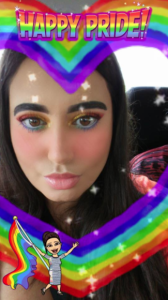 My beloved cousin Siouxsanne Roustazadeh at LGBT pride 2017. A brilliant artist from an artistic clan more sibling than cousin. Her grandmother is my mother’s sister & my favorite aunt Rosemary.

Apologizing again for posting too much just creates another post. But there you go. I’m trying to keep up with the jeremiads about the sky is falling.

“We tried to make a translation of the abuses. The man clearly pleads that he is fasting but all in vain as he’s ruthlessly beaten. #Kashmir”

–tweeted by With Kashmir 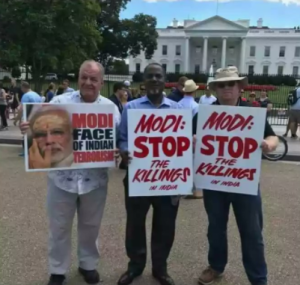 Another photo of the protest at the White House when saffron prime minister Modi met the pumpkin president Trump. Violence & social hatred is what they hold in common.

India tries so hard to suppress the truth about violence against Muslims, Dalits & other oppressed castes in India & about the barbarities of its occupation in Kashmir. Eat it Modi. The truth is out.

End the occupation. Self-determination for Kashmir. End the violence against Muslims & Dalits in India.

If anyone is interested in helping finance a documentary about the Rohingya struggle, please let me know & I can refer you to the film maker. “Helping finance” doesn’t necessarily mean big bucks (doesn’t exclude it either); even small contributions are appreciated.

Someone asked me for this post, originally written in 2015 after several asked me how to ward off verbal put-downs & insults. If you don’t learn early in life to end such aggression, you will grow old tormented by the notion that something about you invites abuse, that maybe you look stupid or like a patsy, with “victim, kick me” stamped on your forehead & butt. On the contrary, it’s usually your best qualities that provoke animosity. Tough noogies for the bullies. Let them get used to your charms.

It was the hard way that I learned these techniques. I don’t want anyone else to learn the hard way when there’s a shortcut to enlightenment & to the art of kicking ass. It is liberating to know how to parry abuse & end it. It doesn’t require you to be a monster but only to claim your dignity.

My friend Trista Hendren published the piece in her blog for easier reading. 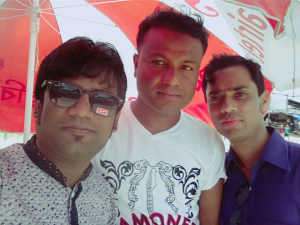 These are the faces of Rohingya resistance, among those who stand against ethnic cleansing in Arakan (Rakhine) state, actively working to educate others on social media about their struggle, advocates for refugee rights, & among the forces for ending the oppression of Rohingya Muslims. (It doesn’t hurt that they’re also so handsome.) 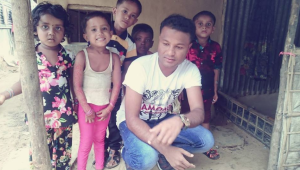 –from Mohammed Imran, Rohingya refugee & activist
(Photo is Imran with the kids)