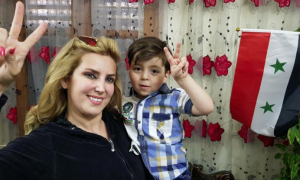 They want us to know that everything the MSM tells us is lies because that’s what their handlers in the palace tell them. While we’re over here trying to get news & posting reports from MSM about the US use of white phosphorous in Raqqa, our intrepid truth-seeker Bartlett is working tirelessly to discredit the story of little Omran Daqneesh & even went to interview his father. But why are the White Helmets & Omran so often the victims of Bartlett & Beeley’s vituperations? Aren’t there bigger fish to fry? Like US bombing of civilians? Don’t they think the war is more important? That’s what concerns Syrian revolutionists & citizen journalists reporting from the war zones.

What we’d like to know is how Mr. Daqneesh & his family fell into the hands of the Assad regime after the fall of Aleppo & what kind of muscle & terrorizing the regime is using to make him lie about what happened to his family when Russian airstrikes destroyed his home, killed his 10-year-old son & traumatized his 5-year-old. We don’t fault Mr. Daqneesh for lying. He has a family to protect from the gulag.

This is a video of a revolutionist & journalist documenting Russian airstrikes in Syria. There is nothing in the entire opus of Bartlett & Beeley that comes close since they can’t get away from the palace or the army.

(Photo is Assadist journalist Kinana Alloush posing with Omran. She became notorious last year for taking jubilant selfies with the corpses of rebel fighters which is a war crime.)