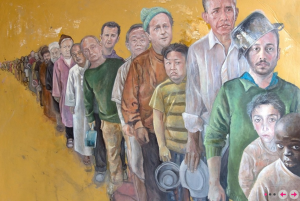 I have no idea why James Hodgkinson waited until he was 66-years-old to become a gunman. Being unemployed at that age probably didn’t help, especially if he was already unhinged. But I first learned about the anger of seniors when I was a bank teller after I left the convent & waited on lines of them every first of the month when their social security checks arrived. I heard wrenching stories of lonely seniors living in roach-infested apartments, predatory, dangerous landlords, not having enough money for food–& that was in the 60s.

As a political activist doing lots of door-to-door & street campaigning, I have met dozens of seniors bristling with indignation at the injustices they face & the helplessness they feel.

A few years ago, there were reports of large numbers of seniors apprehended in bank & business robberies all across the US because most have no pensions & sometimes Social Security (SS) payments go as low as $500 when the average rental is nearly twice that. Since Obama trimmed the cost-of-living increase for SS, it’s very hard for most seniors to make ends meet. And it is very hard for seniors to find work.

So this is no apology for Hodgkinson but since he was active in the Occupy movement, it’s certain that he seethed with fury at the US Congress for administering the attacks on working people.

That’s why across the globe you find seniors on the front lines of struggle–from the anti-austerity struggles across Europe to the Arab Spring in the Middle East to the battles for social security in India.

It seems appropriate to add this painting by Syrian refugee Abdalla Al Omari of world politicians as homeless, powerless, dispossessed.