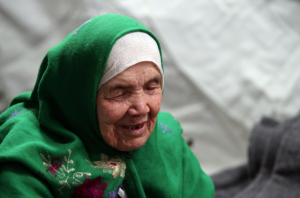 This is 106-year-old Bibikhal Uzbek, an Afghan refugee who has been living in Sweden for about a year. She is blind, confined to bed, & believed to be the world’s oldest refugee. Swedish immigration authorities just rejected her asylum application. She still has a right to challenge the decision but what possible appeal could she make if being blind, bedridden, & 106 years old hasn’t moved them.

Sweden was part of US-NATO operations in Afghanistan & any investigation would surely turn up their continuing military involvement in one form or another. They have every obligation under international law governing war refugees to grant asylum to every Afghan who applies & quadruple the obligation since their military actions created millions of refugees in the first place.

In 2016, nearly 661,000 Afghans fled the continuing US-NATO war; the UN predicts another 450,000 Afghans will be displaced by the end of 2017. There are already nearly 5 million Afghan refugees worldwide.

Immigration is a human right. End the US-NATO war in Afghanistan. Out Now.