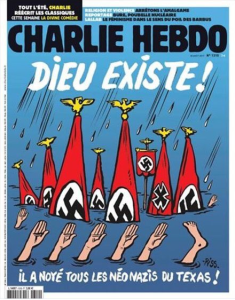 Satire is the genre of the oppressed. Through ridicule, mockery, & ironic juxtapositions, satirists attempt to subvert actual power relations to the advantage of the oppressed. That’s how we can distinguish that Charlie Hebdo is not satire but hate propaganda filled with misanthropy, racism, Islamophobia, & libertarian politics. This cover for its recent issue characterizes victims of Hurricane Harvey as fascists saluting Nazi flags as they drown. The text in English reads: “God exists. He drowned all the neo-Nazis of Texas.” This kind of libertarianism is on a continuum with the punch-a-fascist-in-the-face strategy.