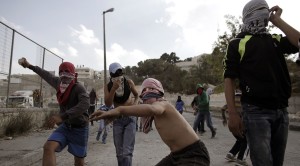 It is profoundly sad that 21-year-old Palestinian Abdelrahman Shaludi from Israeli-occupied East Jerusalem drove his car into a crowd of Israelis & killed a three-month-old baby. We express our deepest condolences to the infant’s family but we are not going to join the chorus of Zionists & other braying jackasses denouncing Shaludi as a “hit-&-run terrorist”–anymore than we denounce others who suffer posttraumatic stress disorder (PTSD).

Only hours before the incident on Wednesday evening, a doctor advised his mother to consult a therapist about signs of mental exhaustion in her son–mental exhaustion caused by Israeli military occupation & dispossession in the Silwan neighborhood of East Jerusalem. Young Shaludi was released from the Israeli gulag in December 2013 after 14 months for stone-throwing. He was again arrested in February & held for 20 days while Israeli cops tried to pound out his admission of Hamas connections which did not exist. His mother said: “They kept on harassing him & summoning him for questioning over & over again & they tried to enlist him into working for them, but he repeatedly refused. They threatened him, saying he would never find work or be able to continue his education or have a normal life.”

If there’s anybody to be denounced here, it’s Israeli apartheid & ethnic cleansing. It’s the Israeli regime for it’s continued brutal & illegal occupation of East Jerusalem, evicting Palestinian residents & moving in Zionist settlers from all over kingdom come. A good share of the settlers who claim Palestine as an inheritance from God probably haven’t seen the inside of a synagogue since their bar mitzvahs. It’s nothing but a land grab, a ruthless chance to get free land.

Israeli military attacks on Palestinian teens & children is not accidental. It is analogous to the US war on Black teens & is intended to thwart, demoralize, crush political rebellion against tyranny among the young. That’s why Israel’s Operation Ethnic Cleansing in Gaza directly targeted children. Many reports going back decades describe the psychological trauma of children in Gaza & the West Bank. PTSD is what happens when you systematically & constantly target kids for ethnic cleansing.

There is something so poignant about this photo of teens in East Jerusalem responding to the flood of Israeli soldiers after the car incident. Youth is a time of life for play & exploring, not a time to fight for your life. Netan-psycho-yahu has pledged the “harshest response” which means massive repression & an escalation of expropriating East Jerusalem for the Zionist monstrosity called Israel. Under international law (which has less legal power than a meter maid) that would be called “collective punishment.”

May the wee Israeli child RIP. And may Abdelrahman Shaludi RIP. Their lives were stolen from them by Israeli tyranny.