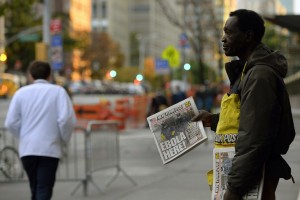 Although Hong Kong protests for democracy continue after nearly a month & a half, there is relatively little coverage & almost no photojournalism of a very significant movement for democracy directly challenging Beijing control. Thousands of protesters continue an Occupy encampment blocking traffic in key sections of the city.China, for obvious reasons, is conducting a campaign to smear the movement as bankrolled & orchestrated by the US & various left groups have made a mockery of theoretical analysis by echoing this campaign. This has been reflected in media reports also.

It is not inconceivable that Beijing, in league with the Hong Kong tycoons, would attack protesters even more aggressively than they already are. Solidarity with protesters is essential & the vicious & misguided political campaign to discredit their cause cuts across that.

This issue of baiting social movements & even the Arab uprisings is important to understand. Because if international solidarity is destroyed with slanders, there is no hope for social transformation. I repost my response to these slanders to discredit those who don’t know their ass from their elbows about political movements:
****
“Many articles insist the Hong Kong democracy movement is orchestrated by the US State Department, because the National Endowment for Democracy (NED)–which is a US government agency likely chock full of CIA operatives–fed money to some organizations & activists. Those who make these allegations have read too many John LeCarre novels or listened too much to Alex Jones–& have participated in politics too little. Of course the US government is involved; they have vested interests in the outcome. But suggesting these protests are CIA street theater rather than a profound social movement for democracy is politically shabby & plays into the hands of reaction.

For our part, we salute the protesters in Hong Kong & extend our fullest solidarity.”

(Photo from BBC; the movement expresses itself in street art using the umbrella, iconic of their movement, as a motif)