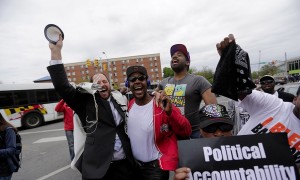 This photo of Rabbi Yerachmiel Shapiro with Baltimore activists is making media rounds today, including an article in Haaretz. They’re celebrating the decision to charge six cops for the murder of Freddie Gray at a May 1st rally.

The Haaretz article reported that fourteen rabbis from the Baltimore & Washington, DC areas joined the protest for “police reform & justice for Freddie Gray” along with “dozens” from Jews United for Justice (JUFJ), a community organization. The Baltimore director of JUFJ issued a statement saying “Jews United for Justice & the Jewish community stand with our neighbors in Baltimore calling for justice for Freddie Gray.”

Historically, Jewish activists have played a central role in social struggle–from building the trade unions to civil rights & women’s rights & every other social struggle–along with the important role they have always played in educating about the character of Zionism & in Palestinian solidarity. But the rancid ideology of Zionism has soured things considerably & put many Jewish activists on a collision course with justice.

There isn’t much known about the politics of Jews United for Justice except that it appears to be fairly new & is funded by the Jewish Federation of Greater Washington. That is what you call a red alert. The Jewish Federation is a confederation, not just of Jewish community groups, but is the leading player in the Zionist movement promoting Israel in the US. It works closely with AIPAC & the State of Israel.

This is what you call a photo op, a propaganda piece, a planted article. When you vet Rabbi Shapiro (easy to do on his FB wall), you find he is a Zionist & supporter of AIPAC. It must have alarmed the hell out of the Zionist establishment when Ferguson activists & Palestinians in Gaza forged bonds of solidarity after Operation Ethnic Cleansing last year in Gaza & the murder of Michael Brown in Ferguson. This kind of hail-fellow-well-met politics is nothing but media spectacle intended to persuade the Black community that Zionism is on their side. My ass, it is! Zionism, in its foundations, rejected the broader struggle against racism & colonialism. It has no affinity with civil rights.

It’s entirely conceivable the good rabbi is sincere in his defense of civil rights. So it would be good to know what he thinks about racist discrimination & police brutality against the Ethiopian community in Tel Aviv, where they are protesting police assaults & chanting “Not black, not white, we’re all human beings.” Will Israel be given a special dispensation for their racist assaults on Ethiopians as they are for ethnic cleansing of Palestinians? Or will the good rabbi (who lived in Israel & knows the score about apartheid) speak out against racist violence?

Build the hell out of the economic & cultural boycott of Israel to answer this fraudulent campaign to legitimize apartheid in Israel.