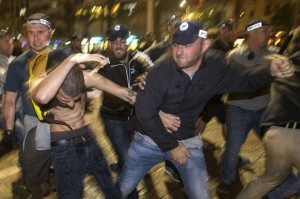 So while Zionists in the US organized a busload to get their pictures taken in Baltimore with Black civil rights activists in a dog & pony show of solidarity, cops in Tel Aviv were assaulting Israelis who came to protest with the Ethiopian community against racist discrimination & police brutality.

Zionist ideology in its formation during the 19th century rejected the broader struggle against racism & colonialism & instead cashed in politically by calling for a Jewish-only state in Palestine. Racism & elitism are inherent to Zionism, not an aberration.

Will the Zionist groups that organized the dog & pony show in Baltimore denounce the racist violence in Tel Aviv? Or will they claim Ethiopians used their children as human shields?