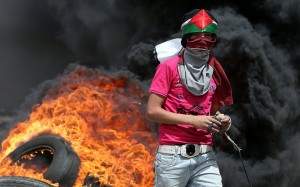 Zionism is a right-wing ideology which in its inception rejected the broader struggle against racism & colonialism. It’s an elitist doctrine which cannot resolve issues of persecution or address the problems of Jewish working people because social hatreds like racism & antisemitism can only be rooted out of human society through solidarity. That’s the iron law of social transformation which Zionism rebuffed.

Now in an interview with Atlantic magazine, Obama pulled one of his fast ones by linking Zionist Israel’s colonial right to exist by dispossessing Palestinians to the struggle for Black civil rights in the US–a movement he has no credentials in as an activist or supporter.

Zionism is a supremacist doctrine, racist at its core.That is being violently played out within Israel against Palestinians & Ethiopians; in the incarceration & deportation of African refugees; in the occupation & ethnic cleansing of the West Bank & Gaza; in its neoliberal projects in African countries, most especially in the blood diamond industry.

Activists in Gaza & in Ferguson recognized their affinity last summer when both were under violent siege & reached out to each other. The oppressed understood what Obama’s manipulations cannot efface. But his comments clearly show the US & Zionist movement will be directing a campaign within the Black community to garner support for Israel. Palestinians & their supporters in large numbers have stood with the Black community against the denial of civil rights & civil liberties–standing on opposite sides of the barricades from the Pentagon tanks & Israeli-trained troops.

Palestinians & their supporters will continue to support & help build the emerging civil rights & Black power movement in the US as we continue to build the economic, cultural, & academic boycott of Israel. Our loyalties & commitments are undivided: we stand against racism, antisemitism, & every form of social hatred.