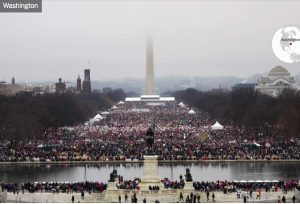 The political forces behind the march were Democratic Party, including war-mongering & Zionist feminists, but whatever the political intentions or weaknesses of the organizers, the millions of participants around the world gave the marches the political content of women’s rights. There were placards & banners for reproductive rights, immigration & refugee rights, LGBT rights, equality & economic justice, antiwar, & the end of violence against women.

They were a glorious international declaration & celebration of women’s rights as human rights. But women’s power terrifies in the same way as Black power, Palestinian & Kashmiri Intifada, or the organized defiance of immigrants & refugees & the marches brought the cynics, the Muslim-haters, & the Assadists out in force to demean & condemn them. One popular FB cynic showed a photo of vibrant young women protesters in pink winter caps (because like it or not, pink is a color theme at women’s marches) & he contemptuously sneered that they were the “cutie-pie pink-cap uprising” & “yet another exercise in faux left futility.” How sneering & elitist can you get toward idealist young women? The comment reeks of contempt for women & our struggles against the brutalities of oppression & comes from a pretentious windbag who’s probably never been off his bony ass to fight for anything.

The NY Times published a vile piece by Asra Q. Nomani titled “Billionaire George Soros has ties to more than 50 ‘partners’ of the Women’s March on Washington.” Nomani, who made a snide remark about pink sneakers, is a Trump supporter & the piece was an attempt to discredit the march by linking Soros, a Clinton campaign donor, to the Women’s March. Who gives a damn who funds those organizations or even the march? What relevance does that have to the millions of marchers? Does it make them pawns of the Democratic Party? Were the marches an attempt to destabilize the Trump regime, as crazy-pants libertarians claim? Or was it the marchers, including from Africa, Latin America, Europe, Australia, who rendered political content to the protests?

Nomani is a Muslim-hating bootlicker who in 2010 argued for religious & racial profiling of Muslims. In December 2015, whilst high school students stood with Muslim classmates being taunted for the hijab, she wrote a piece for the Washington Post titled “As Muslim women, we actually ask you not to wear the hijab in the name of interfaith solidarity.” She wanted teenage girls to withstand bullying & taunting alone & scorned human solidarity.

Her NY Times piece is a racist & shameful thing where Nomani who calls herself a “liberal feminist” baited the march saying the “core underpinnings” of “liberal identity-politics” made white women & anti-abortion women unwelcome. Instead she spent her time combing the internet to get dirt on the march organizers. The irony is that Nomani’s Muslim-hating politics dovetail with many of the march organizers. How in the hell does she explain the millions of white women & likely anti-abortion women who marched in those rallies around the world & felt sisterhood in struggle & no estrangement at all?

Then we have the political current of Assadists & Trump supporters who condemn the marches saying: “Would there have been marches had Hillary Clinton won? Hillary Clinton who supported & allied with Saudi Wahhabism that flings gays off rooftops, enlists female children into marriage, chops off limbs, beheads (practically whoever they want), & stones to death innocent children & their mothers?” These people are really beyond political hope.

In their vituperations is where you most clearly see how hating on Hillary is a political ruse for supporting Trump, though many of them openly support him. It’s where the pathology of apolitical & misogynist hatred dovetails with reactionary political support for dictators & autocracy. One certainly need not be a supporter of Clinton to object to the misogynist hatred directed at her by this rancid political current.

Some of this current actually think it discredited the marches to say they were protests against the politics of Trump. To them we can only say if you don’t oppose the politics of Trump & the brutalities they will impose on immigrants, refugees, the Black community, Latinos, minimum wage workers, women, the elderly, those without healthcare, then you’re marching down the road to political hell & deserve all the ignominy you already claim you get.

Photo of the Women’s March in Washington, DC.

This album from the NY Times shows photos of Women’s Marches: https://www.nytimes.com/interactive/2017/01/21/world/womens-march-pictures.html?_r=5