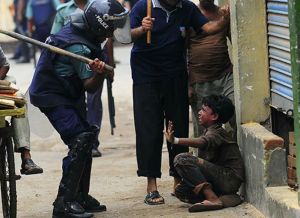 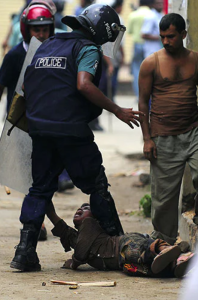 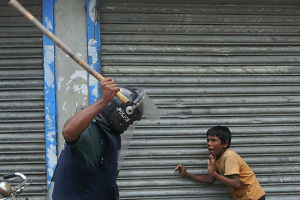 Pol O Falluin’s investigation of child labor in Bangladesh brought to mind these photos from a 2010 garment workers strike in Dhaka.
Children under 14 are banned by law from working in Bangladesh, but as Pol pointed out in his article, 3.5 million children between the ages of five & fifteen are actively working, with 1.2 million of them engaged in life threatening & hazardous work. The same situation prevails in many countries due to the spread of sweatshops like a cancerous growth.

These photos are of the 2010 strike; the first two are the same boy being threatened & then kicked while on the ground. Children are not merely the passive victims of exploitation but the agencies for ending this monstrous system. Such is the burden sweatshop economics have placed on our children.