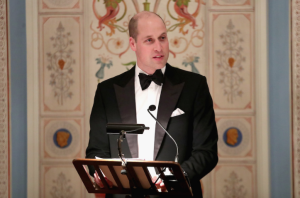 It is reported that William Windsor, the guy some call prince & curtsey to with deference, will be making an official state visit this summer to Israel, Jordan, & the West Bank. He will avoid Gaza so as not to get hit by Israeli snipers or bombers. Israeli President Reuven Rivlin tweeted that the arrival of William on Israel’s 70th anniversary was a ‘very special present’. Don’t try to tell us that the British government, which was directly involved in handing Palestine to Zionist terrorists, is unaware of how Willie’s visit will legitimize Israeli policies, including toward Palestinians & the occupation, regardless of his little side trip to the occupied West Bank.

There is a petition circulating addressed to Willie but it refers to him as Prince William & says ‘please don’t go’. Find us a less feudal petition to sign & we’ll go to town with it.

(Photo is Willie who speaks for the British government)