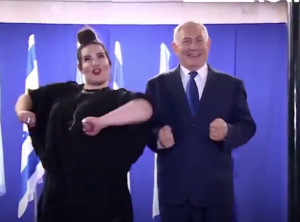 Dutch activists made a video political parody of Israel’s winning contestant in the Eurovision contest who called her performance propaganda for Israel. Palestine Observer called this mockery “a truth-bomb-improvement on the original” because it stands with Palestinians against slaughter. It was aired on a popular Dutch comedy show & immediately brought accusations of antisemitism because Zionists consider any criticism of Israel antisemitic & are trying to make that international law. The Israeli embassy in the Netherlands lodged an official complaint.

(Photo is Eurovision winner Netta Barzilai clucking it up with Netanyahu)