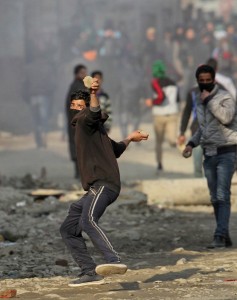 There is no question media is reporting more frequently about the Indian occupation of Kashmir. It isn’t because they’ve just learned about the conflict between Kashmir & India (which goes back to the 1947 partition engineered by England for maximum dissension) or the Indian military occupation which began in 1989 & now has a ratio of nearly one Indian soldier to every four Kashmiris.

What can explain US media’s dead silence for so long, since reporting on Indian barbarism in Kashmir could take the heat off US barbarism in Afghanistan, Iraq, Libya, & so many other countries? According to USAID data, India has been the largest recipient of US military aid since 1946, followed by Israel after its formation in 1948, & Pakistan. The only reason for that assistance is the economic, political, & military importance of those countries to the US–which is why the US feigns neutrality on the conflict in Kashmir & plays both sides against the middle.

There was a slight increase in non-US media attention after 2010 with the eruption of the Kashmiri Intifada of stone-throwing youth against India’s massive arsenal. It’s likely the only reason there is an itsy-bitsy increase in US media coverage now is because of the role of Kashmiri activists on social media who are getting out the truth about their struggle against occupation. That’s why Indian prime minister Modi is cozying up to FB mogul Mark Zuckerberg. That’s why India periodically closes down the internet in Kashmir.

Media wants to get ahead of the story so they can present their own version of the occupation’s reality. We expect Indian media to lie about the character of the occupation–just like US media does about its wars & occupations. The hallmark of this tendentious kind of coverage is incoherence. You can’t figure out what the hell happened unless you have the investigative skills of a police detective & you root through every mangled report looking for the kernels of reliable information.

When Indian soldiers ambushed & executed unnamed Kashmiri “guerrillas,” this past Sunday, apparently (as in other such incidents) a crowd gathered near the cordoned off ambush site to protect those being shot at & to protest through rock-throwing. An Indian media source reported: ”To quell the mob, security forces fired in the air during which a protesting civilian sustained a gunshot injury in his leg.” What idiocy! Can they explain how you shoot someone in the leg when you’re aiming in the air? In fact, two young people were murdered in that protest–19-year-old Danish Farooq Mir, an engineering student playing cricket nearby, & 22-year-old Shaista Hameed, a young woman student.

ABC News in the US reported on the curfew India imposed in Kashmir to deter protests against the murders. They described that hundreds of Indian troops patrolled the streets of Srinagar & other towns, warning people to stay indoors. This is the relevant part of that report:

“Protests by stone-throwing youths & clashes with government forces have become routine in Kashmir, where anti-India sentiment runs deep among the mostly Muslim population.

“Rebel groups have fought since 1989 for either independence or a merger with neighboring Pakistan. India & Pakistan each administer a portion of Kashmir. Both claim the region in its entirety.

“Since 1989, an armed uprising & an ensuing Indian crackdown in the region have killed an estimated 68,000 people.”

Such half-assed reporting, which never mentions the Indian occupation of Kashmir or the tens of thousands of disappeared, tortured, murdered, is exactly like the reporting about Israel’s occupation & Palestinian Intifada. The only reason media is breaking their dead silence is to get ahead of the story to counterpose it to the narratives all over social media as a result of the work of Kashmiri activists.

This is a photo of a Kashmiri youth in Srinagar yesterday protesting the Indian-imposed curfew & in support of a general strike called by Kashmiri political groups to protest the murders of the young boy & young woman on Sunday.

Our deepest respect & fullest solidarity with the Kashmiri Intifada.

India out of Kashmir!