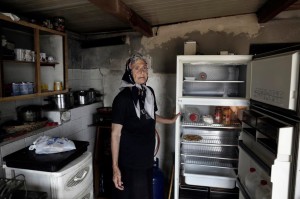 This is 60-year-old Anna Kousoula, a pensioner who lives just outside Athens. Her pension is 300 euros (US $328) & on this she also supports her son who has been unemployed for over four years. Here she’s complaining about her empty refrigerator since due to bank freezes she’s unable to withdraw her pension. We can see she doesn’t live in splendor because a one bedroom apartment plus utilities costs nearly 100 euros more than her pension; just a gallon of milk is 4.60 euros. She can’t drink away her misery because a bottle of wine is 5.00 euros–in the oldest wine-producing region in the world.

It cannot be said capitalism is hanging by a thread but it is in massive, global crisis. How do you maintain oligarchic rule, balance competing economies, negotiate irreconcilable differences, & maintain your own privileges & wealth when protest is erupting everywhere, challenging your ability & right to rule? That’s where repression comes in, with police forces using tanks, assault weapons, tear gas against unarmed protesters. Popular democracy, ushered in with the great democratic revolutions that overthrew feudalism, has now become completely at odds with neoliberalism, the barbaric phase of capitalism.

Why should pensioners like Anna Kousoula, who lives at a deficit, be asked to bail out the banks? Because as we know from the US bank bailout (under lesser-evil Obama), bankers & oligarchs made a bundle in that operation while millions of homeowners were repossessed.

There’s something fundamentally, fatally flawed with the system & whether or not we all agree it should be dumped, we can agree that working people should not have to bear the brunt of its problems or bail out the banks at our expense.

Our fullest solidarity with Greek working people (we feel no such thing with Greek bankers) because the more you can push back against predation, the stronger we will be when they come for us. “An injury to one is an injury to all” remains the iron law of social transformation.