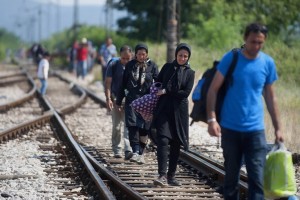 These are refugees on the Macedonian-Greek border where they will try to catch a train to Serbia & move on to northern European countries if they are able to traverse the razor wire fence put up by Hungary at the Serbian border. Thousands of refugees are trekking through the Balkans. Military & covert operations & economic plunder by the US & European regimes in league with reactionary regimes have completely undone several countries in the Middle East & Africa (& the Americas) & created one of the most colossal breakdowns & refugee crises since WWII.

According to Amnesty International estimates, the number of refugees apprehended trying to cross the Serbia-Hungary border increased from 2,370 in 2010 to 60,602 this year. Apprehended & not allowed to move on because Hungary (an EU member) is now functioning as proxy EU immigration control in the way Greece did before SYRIZA (& in the way Greece is certain to again under Troika austerity). The Hungarian parliament recently passed legislation tightening asylum rules. Those able to enter Hungary are abused by authorities, arrested & placed in overcrowded squalid conditions.

Their treatment in Macedonia & Serbia is not better. In fact, Amnesty accuses the Balkan regimes of abusing refugees passing through their territories in a replay of what Central American refugees face passing through Mexico: extortion & assault by both police authorities & criminal gangs. Last month Serbian authorities arrested 29 police officers & nine customs officials for accepting bribes to let refugees pass into Hungary. What likely rankled the regime was not the extortion & corruption but allowing refugees safe passage.

Refugees report being pushed, slapped, kicked, & beaten by Serbian police near the Hungarian border. An Afghan refugee told Amnesty they witnessed a pregnant woman being beaten. They are also arrested without legal recourse or the possibility of asylum in either country. Serbia gave refugee status to one person in 2014 & Macedonia to only ten. One Amnesty official called the Balkans a “no-man’s land” for refugees. And you can bet your bottom dollar both regimes are operating in league with the EU from which they derive no benefits.