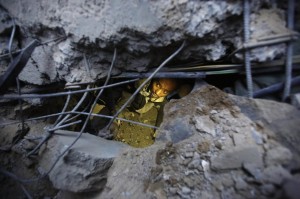 There are a few explanations offered for why Saudi Arabia is bombing Yemen. One says it’s so the Sunni Saudi regime can stop Shia Iran’s regional influence. That narrative claims Iran is backing Yemen’s Houthi rebels in their conflict with Saudi-supported president Hadi. Others claim Iran’s connections to the Houthi are marginal & that the Saudi feudal monarch has domestic reasons for waging war–including placating rivalries within the ruling family in a power & succession struggle favoring one of his sons. Other explanations bring in al-Qaeda in the Arabian Peninsula (the Pentagon’s favorite boogiemen), ISIS, & even tribal secessionists in Yemen. Too much of this kind of analysis rots the brain.

Saudi Arabia is a bastion of reaction in the Middle East, playing a collaborating role in neoliberal domination of the region. It was vital to the US in the two Iraq Wars & it remains vital to US & European economic, political, & military control–along with the Bahraini monarchy, Egyptian military junta, & Israeli colonial regime in reversing & destroying the massive Arab movements for democracy. Those reactionary regimes are US-European allies because neoliberal interests accord with their own: feudalism, sweatshop capitalism, & denial of all democracy.

The US & its allies in the Middle East are turning the region into a killing field–from Syria to Gaza to Yemen to the streets of Egypt. This man is searching for survivors in the rubble of a home destroyed by Saudi bombing in Sanaa, Yemen. We have witnessed this same carnage over & over again because war & bombing is the only way barbarism can impose its control.

Rebuilding the international antiwar movement & demanding the end of bombing, occupation, tyranny is the only way forward for humanity. It’s not a mission we can afford to blunder.