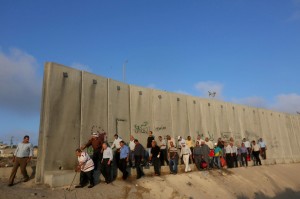 This photo is the apartheid wall at Qalandia, a village in the occupied West Bank near but not bordering Jerusalem. There is a large refugee camp built there in 1949 for Palestinians driven from their lands & homes by Zionist paramilitary squads. According to one UN statistic, over 10,000 people still live there.

The main Israeli military checkpoint for entering Jerusalem is at Qalandia & because it is such a nightmare of pedestrian & vehicular traffic, rubbish, & hassles from border guards, it is the scene of frequent Palestinian protests & altercations between frustrated Palestinians & aggressive border patrol. Today Mohammad Kosba, a 17-year-old Palestinian teenager was shot & killed by Israeli soldiers allegedly for throwing rocks at an Israeli military vehicle & denting it. There have reportedly been several violent altercations since Ramadan began which media has not reported–except those few instances where a Palestinian was the alleged perpetrator.

To cross, Israel requires Palestinians to have permits for work, medical care, education, or religious reasons. They abridged religious permits due to closing down Al-Aqsa mosque to males under 50 years old which is why there are many photos of young Palestinians queued up to scale ladders to cross the wall for prayers in the public streets surrounding Al-Aqsa. Israel took advantage of recent altercations to revoke permits for Palestinians living in the West Bank to visit family in Gaza & even further limit access to the Al-Aqsa mosque compound.