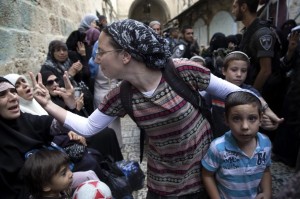 Reposting this because it explains why Israel is targeting the Al Aqsa mosque compound for destruction. It is appropriating Muslim holy sites not because Jews have prior historic & religious claims to the sites but to establish legitimacy for colonialism & ethnic cleansing. It’s a carefully thought out Israeli propaganda & military offensive having nothing to do with Jewish worship of Yahweh. That’s all baloney.

This photo, taken in October, was selected as one of Reuter’s best photos for 2014. An Israeli woman & a Palestinian protester are giving each other the equivalent of the middle finger. Palestinian women were protesting as Israeli soldiers escorted Zionists to the Western Wall–a section of the enclosure around the compound known as the Noble Sanctuary to Muslims & the Temple Mount to Zionists. The compound is located in East Jerusalem under illegal occupation by Israel since 1967. The Palestinians are chanting & taunting while Orthodox Jews living in apartments above the street hurl bottles & water down on them.

The Noble Sanctuary (Al-Haram al-Sharif) is 35 acres of fountains, gardens, museums, as well as the Al-Aqsa Mosque & the Dome of the Rock (which has sacred meaning to Muslims). The entire area is regarded as sacred space & is an educational center as well as religious sanctuary. It’s existed in various reconstructions for over 1,300 years. There’s a fallacious mantra going round that the Noble Sanctuary is only the third holiest site to Islam but is the holiest site for Judaism. The reason offered for why it’s sacred to Judaism is that it’s the original site of Solomon’s Temple said to have housed the Ark of the Covenant & destroyed in 586 BCE (for which there isn’t a shred of archaeological evidence). There was an actual temple on the site between 516 BCE & 70 CE when the Romans destroyed it. It was renovated by Herod (of Biblical & historical ignominy) & the supposed remnants of the Herodian wall make up the Western Wall (known also as the Wailing Wall) heralded by Israel as the most sacred place of Judaism.

There are lots of peculiar religious practices in the world (like worshipping Jesus image in a tortilla) but there is something fetishistic about millions of people making pilgrimage & fervent homage to an old stone wall. Even the pope & every godless US politician make homage at this altar of the Israeli state. One would never ridicule even the most absurd practice but there is no need to feign respect for a narrative fabricated solely to serve Zionist nationalism & not religious commitment. It’s not inconceivable that there’s a mystique around that pile of stones from Herod’s days. But a mystique is not the same as a religious tradition or historic claim.