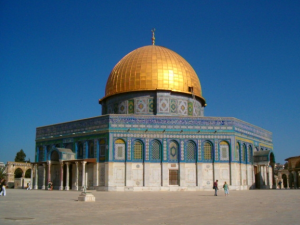 Some have asked me to clarify that the Dome of the Rock (shown here) is not the Al Aqsa mosque which is located just across from it within the sacred Haram esh-Sharif (Noble Sanctuary) compound. Al Aqsa is a much more modest looking building. The Dome of the Rock is also a sacred site to Muslims.

The siege & ongoing occupation is against the entire compound because Israel has been laying false claim to many Muslim holy sites in order to establish a historic, Biblical claim to Palestine. In the case of Al Aqsa, it has long been attempting to destroy the mosque & compound, including by underground excavations that threaten the structural integrity of the mosque. The siege & occupation are part of the ideological & military conquest of the Noble Sanctuary. The surveillance cameras would cover within the compound & the metal detectors would be at all entrances to the compound. It should not need to be said that Palestinians are not the ones who are armed & that Israel has no right to occupy a Muslim holy site with bodies of armed soldiers.

Photos of the Dome of the Rock symbolize not just Al Aqsa but the entire compound because its golden dome is one of the most recognizable & famous landmarks in Jerusalem. 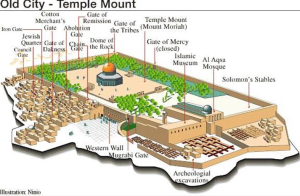