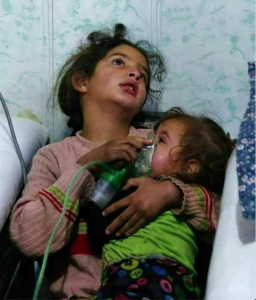 This Syrian girl from Eastern Ghouta died late February while saving her baby sister from Russian & Syrian carpet bombing. At least 127 children were among the 510 killed in the bombing campaign. In confirming its authenticity, it appears that only Arab publications & bloggers circulated this very powerful photo. Language is an issue when English-speakers expect everyone to communicate in English, But the question arises: why are Arab voices on Syria, in fact, why are Syrian voices drowned out in deference to white hired propagandists who’ve spent a total of several weeks in Syria embedded with the Syrian army? The white supremacy & colonial mentality of that should stick out like a sore thumb & shame all those who’ve been taken in, especially when the rhetoric is indistinguishable from Zionist rhetoric against Palestinians.

(Photo from several Arab sources including QNS 24×7 on FB)