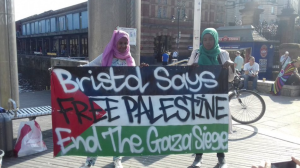 Bristol, England stands with Palestinians: Muslims play an important role in Palestinian solidarity around the world. Arab or Muslim regimes are often berated for standing with Israel rather than Palestinians but that is only true of the regimes, not the populations of those countries who in their majority support the Palestinian freedom struggle. The regimes don’t have the same interests as working people. And anyway, Palestinians are not all Muslims; there are many Christians among them & no one chides governments run by “Christians” like Trump, Macron, or May. It can be safely said that when it comes to the oppressed, most governments are run by godless criminals.