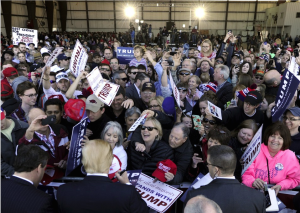 There needs to be analyses of the Drumpf phenomenon, especially since Clinton supporters are using the threat of fascism to manipulate a panic vote for Clinton. Manipulation is a detestable & insulting technique which borrows from the arsenal of propaganda. No similar analyses need be made of Clinton since she is the choice of the power elite & her politics & possibilities reflect that.

Nevertheless, we need to understand how someone so openly racist, misogynist, xenophobic (Clinton is all that except in rhetoric) has pulled off a coup within the Republican Party & nearly brought it to collapse. American capitalism’s general crisis of leadership is of the essence but is not an explanation.

Part of the analyses require looking at the function of the Republicans within the two-party shell game which is to manage, incorporate, & control the rightwing which increasingly included a lunatic fringe, more often than not associated with gun culture. They’re the righteous ideologues on a mission to make this country white.

The demographics of Drumpf supporters are reported as primarily white male working class guys without a college degree. The institutions doing the demographics, like the disreputable Brookings Institute, are tendentious organizations & their methodology for evaluating crowds at a rally really need to be interrogated & evaluated with a fine tooth comb.

But more importantly, the description of uneducated white guys as the backbone of fascist-like politics has class prejudice written all over it. Since when has going to college proven to be an electoral advantage for democracy? In fact, historically it is the professional classes–those with advanced degrees–who are the backbone of fascism in Germany & elsewhere.

The shysters running for office are all Ivy League educated & what good has that done us or them? What good has Bush’s Yale degree done veterans coming back from war with their limbs shot off? What good has it done Iraqi children maimed & disabled by US weaponry? What good has Obama’s Harvard education done the Black community? What good did Clinton’s Yale degree do women, children, & undocumented immigrants thrown off food stamps or Black & Latino kids thrown into jail for smoking a joint?

The fact of the matter is that a majority of eligible US voters, which means working people, do not register to vote because they reject the charade of the two-party con. Those who attend political rallies are not the most perspicacious political thinkers in US society.

This is not an appeal for an uneducated citizenry or an attack on advanced degrees & Ivy League educations. But if you’re looking for an explanation of Drumpf it should be made clear that racism, misogyny, & xenophobia are not at all unique to the working class–as though working people were dumb oxen too stupid to trust with a ballot.

Photo is Drumpf rally. How did they do the demographics on that crowd?

(Photo from The Atlantic)