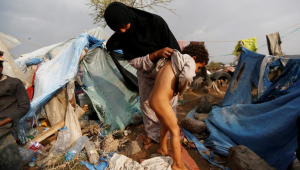 Emancipation US & Saudi-style: this women, displaced by Saudi bombing, is in a squalid refugee camp near Sana’a Yemen. She is showing the skin disease her little boy is suffering. Of course, as in Gaza & Syria, hospitals & medical facilities in Yemen are prime bombing targets. Under international law they are inviolate in war but International laws have no more value than toilet paper when those capable of enforcing them are the worst violators.

There are terribly confused Syrian activists campaigning for Clinton because she promises a more aggressive US military campaign against Assad’s regime & because Tim Kaine, her running mate, once attended an anti-Assad rally. Some even suggest Saudi & Turkish military intervention against Assad.

One of the primary reasons the Saudi US & UK-backed coalition have been bombing Yemen for nearly a year &-a-half is is to obliterate the massive popular democratic uprising of 2011 just as those very same forces intervened against the democratic uprising in Bahrain–with equal barbarism except for the bombing. Those militaries are not going to intervene against Assad on behalf of the popular uprising against his dictatorship. Any who think they will & who campaign for Clinton to rain down US bombs on Syria have another agenda than the freedom of the Syrian people. Or maybe they’re just too confused about US militarism to comment on anything except the colors of the US flag.

This photo shows the character of emancipation US & Saudi-style: hell on earth.

No to foreign intervention & bombing in Yemen, Syria, Iraq, Pakistan Afghanistan! No to Russia, No to the US, No to Israel, No to the Saudi coalition.