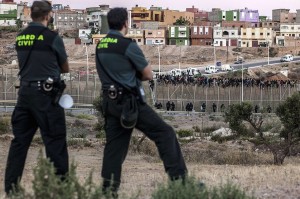 There’ve been several photos of undocumented African immigrants to Europe in the past few days because the Spanish coast guard rescued over a thousand traveling on rafts across the Strait of Gibralter between Morocco & Spain. The photos of those rescued are very poignant: some show mothers with infants; others show immigrants who appear shell-shocked from their ordeal. Most are likely malnourished & many are sick. All have been through hell.

Nearly a thousand also tried to scale the triple-layer, 20-foot razor wire fence that separates Morocco from Melilla, a Spanish territory in north Africa, where they can try to gain entry to Europe to find work.

This photo at Melilla is not the poignant genre. This is of from the white supremacist album–& not as metaphor. Forcing malnourished, traumatized people to risk life & injury while watching nonchalantly, arms akimbo, or trying to beat them back with truncheons could not be more malevolent or repugnant–or more indicting of European Union immigration policy which endangers human beings & humiliates them in the bargain.

Does anyone else find this scene reminiscent of the psychos in the hills of Sderot, Israel watching ethnic cleansing in Gaza? Because the impulse behind it is exactly the same.

Immigration is a human right & human beings have the right to do it with dignity. Tear down Fortress Europe & replace the psychos running the place with those who recognize & honor a human being when they see one.

Open the borders! No human being is illegal!