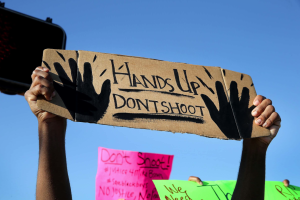 There is nothing new about the murder of unarmed Black teenager Michael Brown in Ferguson, Missouri last Saturday. The Civil Rights Movement of the 1960s & Black Power Movement of the 1970s scared the hell out of the rulers of this country. Racism is so fundamental to capitalist rule that it cannot operate without it. Alarmed by the thrust of the Civil Rights struggle, government operatives attempted to discredit the more radical activists & coopt the leadership to the Democratic Party, the graveyard of social movements. Black Power activists were more often subjected to harassment & violence, including the murder of activists like Fred Hampton, murdered in his sleep by Chicago cops & FBI operatives.

Youth are always a problem for the oppressors. They are a rebellious lot who must be broken, demoralized, chastened to accept racism & injustice as their due. We see that played out in Gaza & we see it played out in the streets of the US where the so-called “war on drugs” is nothing but a war on Black youth, a policy to preeempt at all costs the emergence of Black youth as a political force. Nothing terrifies the rulers of this country more than organized Black political power.

Violence against Blacks wasn’t stopped by the Emancipation Proclamation; the history of violence against Blacks in this country is one of the most unspeakable in world history because it is denied & camouflaged behind the lyrics of “The Battle Hymn of the Republic”. The tack in the war on Black youth since the the 1980s has been massive incarceration of thousands of Black kids for misdemeanor offenses, minor drug charges, & nonsense like lipping off to a cop. Police brutality is a pivotal part of all that & hundreds of unarmed Black teens have been shot down in the streets by police in every major city in this country. And that doesn’t even include harassment like “stop & frisk” laws.

The US government began its massive assaults on civil liberties in the Black community under the guise of the war on drugs. It made chopped liver out of several provisions in the Bill of Rights. White people, including political activists believed all the rubbish about drug gangs, dysfunctional Black families run by matriarchs undoing Black manhood (the Bill Cosby schtick), “Black on Black violence” & a dozen other slanders against Black people. As a result police ran rough-shod over the Bill of Rights. They would shoot an unarmed Black teen & walk away scot-free from prosecution. It’s been open season on Black kids for a long time. And in a case of chickens coming home to roost, the Bill of Rights is now at risk for all of us. That’s where you see the “an injury to one is an injury to all” thing is not just a ceremonial mantra but an iron law of social change.

Ferguson, Missouri is not the first time there have been massive protests against police brutality. The murder of Trayvon Martin in 2012 ignited protests all over this country. So it is no accident that disreputable characters like Al Sharpton (reverend, my ass!), a fool & an operative for the Democratic Party (DP) hot-footed it to Missouri from his bully pupit at CNN. He’s not there to organize massive opposition to racist violence; he’s there to make damn sure it doesn’t go too far but just enough to let off a little steam & then get everybody back voting for the local DP politician in place of taking social action. (It’s an old shell game; once you’ve seen them derail a few social movements you get to know the pattern.) The role of the DP is to control mass opposition to injustice (the role of the Republicans is to control the crazies on the right). What is needed is another civil rights & Black power movement, one that railroads the DP out of the way, as Malcolm X suggested, & will make no compromises that do not serve justice for the Black community & its kids.

“Hands up don’t shoot!” is the mantra of the new movement emerging in Ferguson, Missouri because, have no doubts about it, a new movement for civil rights & Black power is emerging.

May Michael Brown RIP–along with the hundreds of other Black teens shot down on the public streets–while DP politicians including Obama speak of a “post-racial era”. There will be no “post-racial era” until they pull their SWAT teams out of the Black community, until there is full educational, housing, employment, social, political, economic opportunity for every Black boy & girl. And to accomplish that, quite frankly, will take a revolution.