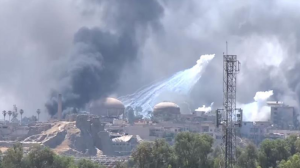 Some media, particularly Russian & English media, have been reporting for about a year that ISIS has increased its use of women fighters, women suicide bombers, & women using children as human shields. Today they released a photo of a woman holding a small child fleeing the fighting in west Mosul & identified her as a suicide bomber who blew up herself & the baby.

It might be wise to suspend damnations until these reports can be verified by some reputable source. We know ISIS forcibly uses children as fighters; these are victims & defined as such under international law, not to mention every semblance of good sense. It may well be the women are also coerced but we don’t know since women are also perfectly capable of criminal activity.

What makes the reports reek is that the source of this information is Iraqi state TV from Iraqi reporters embedded with the Iraqi army & special forces shelling Mosul with rockets & mortars without regard for the hundreds of thousands of civilians there. The woman in the recent incident died with her child; two soldiers & several civilians were reported injured. There’s no indication Iraqi state TV reports on the number of civilians killed by Iraqi mortars or the US use of white phosphorous in Mosul. It’s reported by other sources as over 10,000 civilians. Such selective outrage is always more suggestive of propaganda.

Last week, Newsweek & Associated Press reported on ISIS women fighters using their children as human shields & claimed ISIS was using women & children to stop US coalition air strikes & Iraqi ground force rockets & mortars. The US coalition & Iraqi forces have been bombing & shelling hundreds of thousands of civilians for over nine months, including elderly, infirm, disabled, women & children. Why would the sight of another woman & child fleeing the bombing deter them for one moment from letting off bombs? In fact, Newsweek quoted an unnamed Iraqi commander who said “under the circumstances civilian casualties should be acceptable.” His exact words: “They’re all ISIS. Just kill them all. There are civilians there, but they are ISIS families.”

This is not to defend or downplay the criminality of ISIS in any way or to suggest that using women & children is beneath them since we know they use children as soldiers & have contemptible attitudes toward women. But there is no need to invent atrocities to justify the barbaric US coalition & Iraqi siege of civilians in Mosul.

The only principled demands are the immediate cessation of bombing in Iraq & Syria; the immediate, unconditional withdrawal of all US coalition, Russian, Iranian, Hezbollah, & other foreign military forces; & the end of all military aid to Iraq.