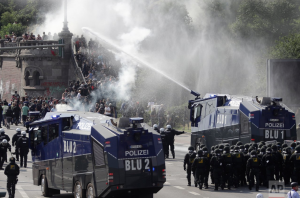 Police are here using water cannons & armored vehicles to clear a road of protesters on July 7th. Germany has been using water cannons against protesters for a few years now. Hungary has been using them against refugees trying to cross its borders. They’re deployed regularly now against protesters most notably in the Philippines, Chile, Venezuela, Kashmir, Russia, Indonesia, Turkey although other countries are now purchasing them for use.

Their use against the US civil rights movement & South African anti-apartheid struggle have made them an iconic image of repression. So of course the regimes that most deploy them are among the most repressive flouters of democracy. They will again become part of the repressive arsenal in every country if their use is not vigorously opposed. They are assault weapons which cause broken bones, damage to internal organs, skin, respiratory, & eye damage. Using them against exhausted, malnourished, traumatized refugees is an abomination.