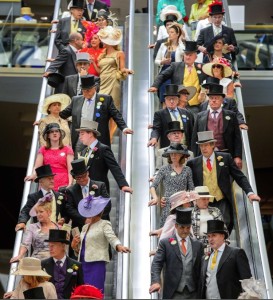 We can only regret that Honoré Daumier, the great French caricaturist of the 19th century, is not alive today to do the Ascot Races justice. He wasn’t like modern-day French philosophers drowning us in sheer tonnage of adjectives signifying nothing. Our man preferred verbs & went straight to the point, eviscerating pretensions & pomposities in politicians & plutocrats alike. He’d have a field day with this scene of the English peerage riding escalators to the main grandstand. He’d have a field day with those bonnets.

If you compare his caricatures of the French parliament of his day to this scene, you will observe that the haughty faces of conceit don’t change very much from one century to the next. That’s because underneath that pomposity is the obsequious which is the fundamental character of inequality, including these ceremonial vestiges of feudalism & increasingly the character of neoliberal capitalism.

These hoity-toities will be betting on the ponies with Betty who never misses a horse race & they’re hoping for just a brief moment in her presence. Yippee.