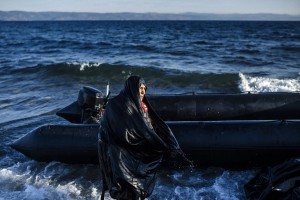 There are hundreds of photos of distraught infants & toddlers all along the refugee route from Turkey to the Hungarian & Croatian borders. The extreme anxiety of parents is apparent, especially since many of the dinghies are being disabled by Turkish & Greek coast guards as they cross the Aegean Sea in wet weather & there is no shelter for most refugees from the approaching winter cold & rains.

Media is also reporting a huge number of unaccompanied minors from Afghanistan, Iraq, Syria, orphaned or sent abroad by desperate parents in hopes they can forge a better life away from war.

This elderly woman is arriving at the Greek island of Lesbos after crossing from Turkey. Others have landed with wheelchairs or on crutches. Many are probably arriving ill from the wet & chill. Arriving on a dinghy is not quite like touring the Aegean on a yacht.

One heartening sight is the number of European volunteers helping families disembark in Greece & volunteers along the route providing aid. Just because media has a blackout on the refugee crisis from Africa to Italy & Spain & less coverage on the Turkey to northern Europe route, we should not in any way turn our attention away. We must continue demanding our governments open the damn borders & provide every social service, especially immediate health care & shelter to refugees who have already endured more than any human being should in one lifetime.

Immigration is a human right. Re-building the international antiwar movement is imperative to stay the hand of militarism causing such massive dislocation but until we succeed in doing that, our demand must be “Open the borders”! No human being is illegal.