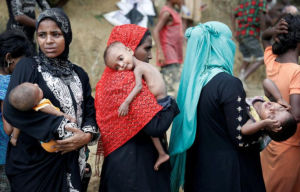 UNICEF issued a press release yesterday announcing the delivery of 100 tons of supplies for the estimated 250,000 Rohingya children in refugee camps. The aid arrived in Dhaka yesterday by cargo plane & will be trucked to Cox’s Bazar about 367 km/228 miles away.

No one wants to be a carping critic but this refugee crisis is going into its fifth week with reports all over media that thousands of refugees have been without food, clean water, shelter, medical care that entire time. So it is not unreasonable to ask UNICEF, whose stated mission is the welfare of children & whose annual budget is over $5 billion, why the hell it took them so long to deliver aid?

There has to be a public accounting from these private & public humanitarian aid agencies which are Johnny-on-the-spot to raise billions but so parsimonious & dilatory in delivering aid.

Stand with the Rohingya against genocide; demand our governments provide immediate emergency aid to the refugees along with the right to asylum.