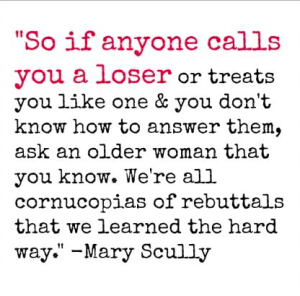 Got called a loser again by someone with elite academic credentials who thinks that’s a worthy way to talk to supposed inferiors. In my naive youth that smarted & got internalized & took its toll. But after feminism & decades of experience, I don’t take that crap personal anymore. Most women my age swat that stuff away like a gnat.

But I don’t forget how hurtful it’s meant & how disrespectful it’s felt by working class kids, by young women, Blacks, Latinos, Native Americans, by the oppressed who don’t yet know how to stand against it–a skill the elite grow up with–or how it discourages by tapping into acculturated insecurities & sense of inferiorities. That’s why it still rankles me & pisses me off.

I once saw a group of Puerto Rican guys from the Bronx turn their backs on socialist politics because they hated inequality & wanted to fight against it but the other well-born, privileged socialists treated them with disdain. I plowed myself through that disdain because I believed in social transformation more than I was taught not to believe in myself & I was backed by the power of feminism. Forty years later, I still bristle when I think of losing those young guys because they would not tolerate disrespect from smug dilettantes.

Identity politics means something to the oppressed; those railing against it have a shallow experience of the weight social inequality bears because they know mostly privilege.

So when you me call me a loser or treat me with hauteur or in that passive-aggressive way elites have, it’s not endearing but doesn’t lay me waste any more, & I won’t forget my younger brothers & sisters still struggling & rebelling against socialization as inferiors but still not confident enough to kick its ass in no uncertain terms. Cause I want them to learn, with less struggle than my generation, that usually they put you down because competition is the only way they know how to relate to others. Social solidarity & collaboration are beyond them because that involves respect & equality. Those are the qualities the oppressed excel at which is why social transformation cannot happen without us.

So if anyone calls you a loser or treats you like one & you don’t know how to answer them, ask an older woman that you know. We’re all cornucopias of rebuttals that we learned the hard way. One thing we’re always good for till the day we die: knowing how to stop a sucker punch in its track. That’s the way civilized people teach good manners.

(Meme by Trista Hendren from The Girl God)