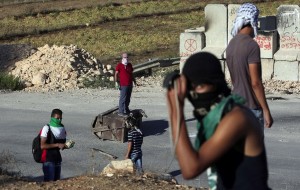 This protest last week was after a march in defense of al-Aqsa mosque & the Noble Sanctuary in East Jerusalem, illegally occupied by Israel since 1967 & now under military siege to destroy the mosque which has stood there since 705 CE–1,310 years. It’s a monumental religious site which belies Israel’s historic & religious claims to Palestine.

The Guardian-UK caption to this photo included this non sequitur: “Three days of clashes between Israeli police & Muslim protesters rocked Jerusalem’s Al-Aqsa mosque compound this week as Jews celebrated their new year.” What the hell does the Jewish new year have to do with the military siege of al-Aqsa? Zilch! But it has everything to do with the Israeli campaign to destroy the mosque so a synagogue can be built there. It’s a centerpiece of myth-making to create a history for an invented people who came from all over Kingdom Come with different cultures & traditions & need to forge a national identity.