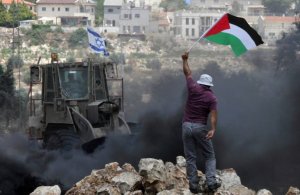 This remarkable photo was in my FB posts from July 5, 2014 but was actually taken in June of that year. The young man is a Palestinian protester at the weekly protest against the expropriation of Palestinian land in the West Bank village of Kufr Qaddum, near Nablus.

On every Friday since July 2011, Palestinians have been holding non-violent protests against the expropriation of their lands & the expansion of the illegal Israeli settlement of Kedumim. Of the village’s over 24,000 square meters (6,000 acres), the Israeli military has so far seized over 4,000 square meters (1,000 acres) for settlements & is still expanding.

In response to the military violence, Palestinians burn tires, place rocks to obstruct military vehicles, & use stone pelters to force the army to retreat. There is no legal recourse for Palestinians against this illegal encroachment because while the village itself is in Area B, the Oslo Accords designation for land under the jurisdiction of the Palestinian Authority, most of the village’s agricultural lands are located in Area C, the designation for Palestinian territory under complete Israeli military control–in other words, land that has already been illegally expropriated. Nothing could more powerfully condemn the Oslo Accords as the conditions of Palestinian surrender & a way to render legitimacy to Israeli colonialism.

Palestinians have stood alone, vilified as terrorists, for most of the past 69 years & they have never bent the knee to colonialism, despite the betrayals of their leaders. The most powerful way to stand in solidarity with their struggle against apartheid, ethnic cleansing, & colonialism is to honor & build BDS, the economic & cultural boycott of Israel. Buy nothing with barcode beginning 729 & check every single product you buy from canned goods to cosmetics.