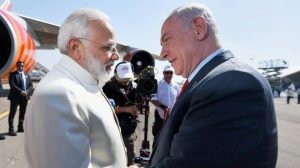 Netanyahu greeting Modi on his 3-day state visit to Israel in the kissing ass asana:

Put aside all the sentimental blither about the deep connections between the people of India & Israel. Modi & Putin exchanged the same crap when Modi visited Russia last year. This is all about militarism, military partnerships spawned in hell & affinities rooted in war, colonialism, occupation.

Russia is the biggest supplier of military equipment to India, including aircraft & nuclear-powered submarines. One aircraft deal alone was worth US$35 billion. Since 2003, Russia & India have also held joint military exercises between their armies & navies & have now expanded it to include the air force.

Israel is the second largest military supplier to India. Just in the decade between 1999 & 2009, the sales of Israeli armaments to India was worth over $9 billion, including a surveillance satellite system. Israeli companies have arms deals worth over $2.6 billion for 2017 alone. Included in the military deals is a contract for Israel to provide counter-terrorist & urban warfare training to Indian paramilitary forces deployed to Kashmir. Against stone pelters & unarmed civilians?

Not left out of this malignant alliance, the US has expanded its military relationship with India as part of the military build-up in the South China Sea, supplies military aid to both Pakistan & India, & has engaged both countries in the war against Afghanistan.

In this military scenario where Israel, Pakistan, & India play such vital roles in US military strategy & where Russia & Israel are so vital to Indian militarism, none of these regimes are neutral toward the Palestinian or Kashmiri struggles against occupation but are directly implicated in the barbarism.

Human rights & antiwar activists around the world have a duty to protest the occupations & expose all the regimes who feign neutrality toward or support for Palestinian & Kashmiri justice. In this regard, those who support Russian intervention in Syria are choosing to side with barbarism, not justice.