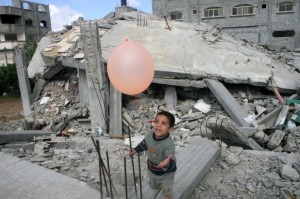 This poignant photo is widely circulated on social media as if it were from Israel’s current murderous assault on Gaza but it was taken during Israel’s Operation Cast Lead assault in 2009. The original caption identified this as the rubble of the little boy’s house in Jabalia, northern Gaza.

Israel has really never stopped bombing Gaza since it removed Zionist settlers in 2005 under prime minister Ariel Sharon’s “unilateral disengagement” plan touted in media as a peace initiative, but as we know now, was intended to facilitate ethnic cleansing & avoid harm to Zionist settlers.

The continuous bombing of Gaza has been punctuated by several-day operations including Operation Cast Lead in December 2008 & January 2009 (22 days) & Operation Pillar of Defense in November 2012 (8 days) & now Operation Protective Edge which continues after 18 days. All of which combine to make Operation Ethnic Cleansing. After the 2009 massacre, a UN commission was formed to investigate war crimes, headed by Judge Richard J. Goldstone, a South African judge & chief prosecutor of the UN criminal tribunals for the former Yugoslavia & Rwanda.

The commission report published in September 2009 was an important exposure & indictment of Israeli war crimes but it was an equivocal document also indicting Hamas self-defense as war crimes. It could be said “equivocal” is not damning enough of such diplomatic deceit & false even-handedness. Israeli politicians including president Shimon Peres & Netan-psycho-yahu went ballistic denouncing the exposure of Israeli war crimes. People are still trying to figure out where Mahmoud Abbas of the Palestinian Authority stood on the report because he had his head stuck so far up Israel’s “you-know-what” that no one has ever been able to discern–not unlike his conduct today.

Predictably, the US government damned the report as biased against Israel & for letting Hamas off easy & the political halfwits in the US Congress played their usual role by passing resolutions of condemnation. As we know from the November 2012 & current Israeli assaults on Gaza, nothing practical came out of the Goldstone report.

Unfortunately Goldstone turned out to be a cowardly man who couldn’t take the criticism & perhaps the loss of prestige in awards & honoraria that come with turning your back on Israeli war crimes. In 2011, he repudiated the commission findings & said Israel did not in fact intentionally target “civilians” in Gaza as a matter of policy. The other principal authors of the report exhibited more backbone & stood by the original condemnations of Israel for war crimes. Ah well, just another day at the UN, where equivocations & deceits are the diplomatic norm.

There are calls for another UN commission to investigate war crimes in Gaza on both sides: the side of genocide & the side of self-defense. Been there, done that! There needs to be a truly independent commission to investigate charges of human rights crimes & one of the first things they’ll need to demand is iron-proof documentation of property damage in Israel from those alleged barrages of Hamas rockets. We’ll need to see documentation of those alleged 31 cement Hamas tunnels from Gaza into Israel. And of course, we’ll need to see proof positive that those tunnel entrances were under hospitals, mosques, schools, & homes in Gaza to justify Israel bombing them into smithereens. We’ll need to see proof that ambulances harbored rocket launchers & that medics recovering bodies & rescuing wounded were really Hamas “military operatives” which justified Israel bombing them.

The world already has overwhelming documentation of Israeli war crimes in Gaza; most of us can’t stomach any more gruesome evidence. Their defense for targeting children & using weapons like flechette shells & Dime shrapnel is already being played out in world media accompanied by a chorus of braying jackasses from governments–in which Canada, the UK, & US distinguish themselves. That defense comes complete with the evil fairies from outer space reversing Hamas rockets to protect Israel. But of course in an independent inquiry those evil fairies won’t hold much sway so they better come up with something much more convincing than farce.

(Ashraf Amra is the actual photojournalist who took this photo for APA Images; that is misidentified in current captions.)