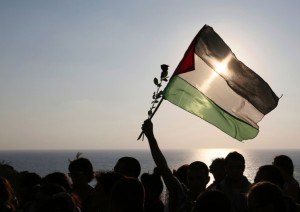 The monstrous assault hammering Gaza approaches three weeks & the barbarisms of Israeli crimes against Palestinians has men & women of good will around the world horrified & shell-shocked. We stand witness to genocide. But we do not stand silent & complicit. Tens of thousands around the world in hundreds of cities gather to demand “stop the massacre in Gaza!” in the biggest expression of human solidarity since we gathered to defend the Vietnamese people against the US war machine.

While our brothers & sisters in Gaza run from bombs & thousands in the occupied West Bank marshal in defense of Gaza & intifada, solidarity activists around the world hold high the banner of Palestine. We were all Vietnamese; today we are all Palestinians.

This solidarity rally is at Rawshe Rock on the Mediterranean coast in Beirut (July 22nd).