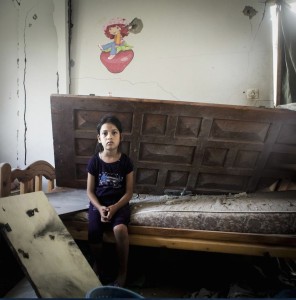 There’s apparently a fair amount of controversy about the distinction between ethnic cleansing & genocide & when you look at Operation Ethnic Cleansing in Gaza you can sure see why. According to those who parse these things, genocide is intent on mass extermination of a particular ethnic or religious group. Ethnic cleansing includes trying to destroy the entire culture of a group as well through taking out homes, social centers, farms, monuments, places of worship, infrastructure along with forced migration & population transfers. That means in ethnic cleansing they give some of the targeted group a chance to run for it before they mow them down. That also means Operation Ethnic Cleansing was both a genocide & an ethnic cleansing because Israel & Egypt had the borders sealed up tighter than a drum & there was no place for Palestinians to flee from carpet bombing.

So Israel was on a mission–not just to take out Hamas rocket nests or destroy the smuggling tunnels transporting vital needs like medicine & foods banned by the embargo–but to destroy homes & mosques. That would explain the destruction of 161 mosques in Gaza & (according to the UN) 100,000 homes, leaving 600,000 Palestinians homeless. But here’s where parsing gets confusing: what is it when Israel bombs hospitals & ambulances & targets small children?

These legal definitions only matter because they’re used to sidestep condemning Israel or holding them accountable with sanctions for the destruction of Gaza, the murder of 2,200 unarmed people & the injuries to 11,000 people, including debilitating shrapnel damage to children, amputation, & disfigurement.

In the midst of all this there are those who survived & the children who cannot be protected from the terror of ethnic cleansing/genocide. This is 9-year-old Yarra Ziada from the Shujayea neighborhood in Gaza City, an area especially targeted by Israeli bombers. The photographer asked several children to talk about their loss. They’re not old enough to elaborate distinctions; they only know the terror of fleeing bombers.The kids told the reporter what they missed from before the bombing. This child, sitting in the rubble of her bedroom, said she misses her games & red dress & is afraid the bombings will start again. Other children said they missed their dolls, teddy bears, posters, computers, books, clothes, playstations, & kites.

According to Oxfam, given the current state of progress it may take 50 years to rebuild Gaza. Actually, Israel has no intention of letting Gaza get rebuilt. The continuing Israeli embargo of Gaza is ethnic cleansing by other means than bombs. Or is it genocide?

Building the cultural & economic boycott of Israel is absolutely vital to Palestinian justice & solidarity. Gaza is entering the winter season with thousands living in rubble. Those who have means should consider contributions to relief agencies; some may even want to consider a drive for dolls & teddy bears which are not frivolous but have always played an important role in the lives of children. We need to find out from those agencies in Gaza what it is they most need.