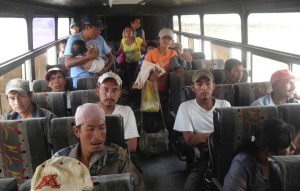 Just when you think you’ve exhausted your adrenalin, you hear another Walmart story. This one doesn’t have to do with workers dying in fires or buried in cement debris at Walmart garment sweatshops in Bangladesh; it’s not about millions of dollars in Walmart wage theft from garment workers in Cambodia, Guatemala, Nicaragua, or Haiti; nor is it about the wretched working conditions, sexual assault, & physical violence to garment workers in those places. This Walmart story is about farmworkers on Mexican agribusiness plantations & the crime involves all the big US supermarket chains, including touchy-feely outfits like Whole Foods.

Mexico was the first country to feel the scourge of neoliberal agriculture. You could say it was the testing ground for a system that is now ravaging several continents. Under the aegis of the IMF, World Bank, the Ford & Rockefeller Foundations, the so-called “Green Revolution” was launched in Mexico in the 1940s, ostensibly to increase world food production to overcome mass starvation. Eventually other players entered including Monsanto, Dow, Dupont, USAID, & the Gates Foundation.

The green revolution, which is simply neoliberal plunder dressed like a cucumber, is production of cash crops for the export market making countries unable to produce food for themselves. One example of how that operates is that Mexican cuisine does not include much broccoli but under agribusiness thousands of acres are dedicated to broccoli for the export market & destroy the self-sufficient methods of traditional farmers. The green revolution involves chemical farming & genetically modified crops which cause land degradation, pollution, loss of biodiversity, depleted food quality, & of course, massive human health problems for farm workers; it also requires genetically restricted technologies making farmers dependent on outside companies for new seeds. The green revolution, like the war on drugs, is a bag job.

In some countries part of this neoliberal process is deforestation, hydroelectric projects, oil drilling, mining, massive water diversion schemes requiring the forced removal of Indigenous people from traditional lands farmed by them for countless generations, the dispossession of millions of farmers & farm workers, & their forced migration to urban poverty or (in the case of Mexico) to the US. In narcostates like Mexico, drug plantations are part of the picture & marijuana production has increased 35% since the beginning of the so-called “war on drugs.”

The ruthless expropriation of small farm holders by agribusiness isn’t an accidental feature of the green revolution but was intended to undercut radical proposals for agrarian reform that would serve farmers & not the Mexican & US oligarchs. Land ownership & tenancy are not left up for grabs but privilege international agribusiness in law & with military muscle against resisting farmers so that food systems are firmly in the control of agribusiness. The food shortage justifying this land grab has not thereby been solved but exacerbated & in a world where the majority of people depend on farming for their livelihood, that has meant dispossession & migration. At a certain point, neoliberalism becomes indistinguishable from colonialism.

So what has poor little Walmart got to do with all this? Have they just become our favorite whipping boy? Walmart runs supermarkets where they sell the drugged up, genetically modified produce. Over half of Mexican produce is for the US market so Walmart isn’t the only guilty party; it’s just the most ubiquitous one wherever you go on this planet whether you’re selling tee-shirts or tomatoes. And wouldn’t you know that one of the Walmart produce suppliers in Mexico got raided by cops last year for holding 280 migrant workers hostage & working them like slaves. They refused to pay them, wouldn’t let them leave at gunpoint, housed them in rat-infested quarters without toilet, bath or laundry facilities, sometimes without roofs, & often employing violence. Walmart, like usual, dummied up & claimed no knowledge of the criminality.

The agribusiness plantations are rife with child labor–an estimated 300,000 by human rights groups (though the Mexican government low balls it at a staggering 100,000). That’s no big deal to US supermarkets since in 2012 the Obama regime strengthened laws denying safety protections to the 800,000 children farmworkers here. It’s certainly no big deal to Walmart since there are thousands of kids working in their garment sweatshops, including the ones who died in fires & the building collapse. The World Bank, one of the chief architects of the green revolution in Mexico, issued a report last year deploring the growth of child labor in agribusiness. Mostly the report was a string of sociology 101 cliches including where they blamed child labor on uneducated parents.

This photo is workers from Bioparques (produce sold in Walmart & other supermarkets under Kaliroy brand name), a labor camp in the state of Jalisco. Bioparques is bankrolled by the World Bank (they got $17 million in 2007 to expand operations) & was honored in Mexico as a “socially responsible company.” They’re the outfit that held 280 workers as slaves. One escaped (others who tried before him were caught & severely beaten) & notified police, who raided the joint & let the migrant workers go free. This is a bus of them headed back home. Will anyone be surprised to know the legal case against Bioparques has stalled in the courts? It’ll be more of a shock if it ever moves forward. It’s not at all certain the Mexican NGO honoring Bioparques was unaware of their slaving. That’s just the way neoliberal barbarism rolls.

(Photo from Secretariat of Labor and Social Welfare, state of Jalisco, Mexico)