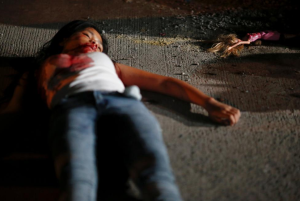 This is a 17-year-old girl lying next to her Barbie doll after she & her friend were assassinated by drive-by vigilantes in a Manila alley as part of Philippine president Duterte’s war on drugs.

According to police, a cardboard sign found on the body of her friend read, “You are a drug pusher, you are an animal.” Not to her family & not to us, she wasn’t.

They were human beings & had nothing to do with drug trafficking in the Philippines, which is a multi-trillion dollar international operation run by bankers, criminal cartels, military forces, & governments.

Those who can overlook these human rights crimes orchestrated & incited by Duterte just because he blows smoke up their asses about US militarism have no right to call themselves progressives.

Our deepest condolences to the families of these young girls. May they Rest In Peace.