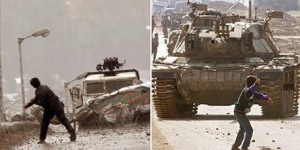 Reposting this from October 29, 2015, as we stand in awe of the beleaguered but undaunted spirit of Palestinian & Kashmiri resistance to occupation & colonialism:
*****
Kashmiri photojournalist, Showkat Nanda, took the photo (on left) of a small Kashmiri boy facing off with stones against an Indian army tank in 2009. In a very moving account, Nanda tells how Indian paramilitary forces were shooting at unarmed protesters in the town of Baramulla. Young boys carried the body of an injured boy shot in the chest away from the scene & handed him to Nanda as he died.

We should take a moment to honor Faris Odeh, this Kashmiri boy, & all those who have lost so much & stand so fearlessly against military barbarism–particularly those enduring the Israeli pogrom & the Kashmiri military siege right now..