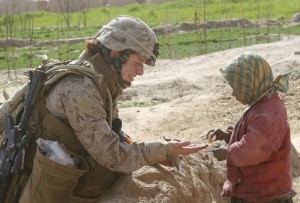 This so-called tender moment is what you call war propaganda: a US woman Marine in Afghanistan sharing a cookie with an Afghan child. That doesn’t mean every US soldier should be demonized but let’s face it–going through combat training with guns & rifles, learning to drink cobra blood in jungle survival maneuvers, & being part of an occupying army does not bring out your maternal instincts.

The worst part of this rubbish is how brutally occupation has fallen on women & children in Afghanistan. What they’re not showing is the rest of the Marine battalion engaged in mortar & missile battles, the constant airstrikes, or the harassment of villagers for suspicion of harboring Taliban. It isn’t any less brutalizing if done by a woman than a man Marine.

What they’re also not talking about is the number of women soldiers sexually assaulted, not by the Taliban but by fellow soldiers & commanders. They’re not talking about the statistic that more soldiers now commit suicide than are killed in combat. That’s not from handing out cookies but from lobbing grenades & terrorizing children.