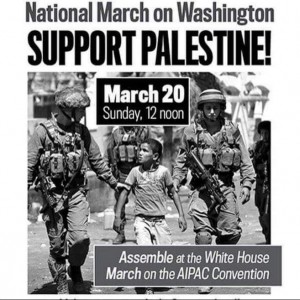 Sunday, March 20th, is the Palestine solidarity march in Washington, DC. The Palestinian struggle is one of the most important anti-colonial struggles in the world today. That can be partially judged by the vehemence against BDS & because the most powerful forces of neoliberal barbarism are aligned against them. That is certainly not because they give a rat’s ass about the welfare of Jews. Those who stand against persecution of Jews also stand in support of Palestinians because that is where justice lies.

The antiwar movement has been weak for a long while now, unable to counterpose popular opposition to several US wars. That is even more true during an election period when historically political activity goes down to a whimper. That makes this march for Palestinian justice all the more significant & why we should make it large. No one should be disappointed if it isn’t in the tens of thousands. That it’s happening at all in an election year is a gigantic victory testifying to the growing power of solidarity & of BDS.

Long live Palestinian Intifada. All out March 20th in solidarity.