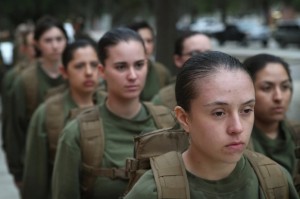 On Tuesday, the US Senate voted 85-13 in favor of a $600 billion defense spending bill called the National Defense Authorization Act. There are several controversial & reactionary provisions in the bill, including prohibiting the closure of Guantanamo. How could US defense appropriations be anything other than reactionary?

Included in the bill–which is far from being law because the House of Representatives has a conflicting defense spending bill–is a provision to require women to register for the draft & would impose the same requirements that now apply to men after they turn 18 years old.

The draft was a major political issue during the Vietnam War with millions protesting against it. At one point it was proposed to include women. Conservative elements in the women’s movement campaigned for that while antiwar feminists actively opposed it, arguing that the draft should be abolished for both men & women. As a result of massive opposition, it was ended in 1973, two years before the war ended, & replaced with an all-volunteer army.

Conservative forces (who oppose women’s rights on every other issue) now want to reinstitute the draft & want women included because military recruitment is down & soldiers do multiple tours of duty. But the US Congress & Pentagon haven’t been willing to deal with the problem of sexual assault within the military which involves thousands of assaults every year. Hillary Clinton, that great champion of women, said she supports including women in the draft but has never campaigned for protecting women in the military from sexual assault. Nor can any of them explain why women should kill innocent people overseas under the guise of emancipating women from Islamic oppression when they don’t even have equal rights or control over their own bodies in this country.

The inclusion of women in the draft is not a “culturally significant milestone” as a Huffington Post editor called it. Training women to be killers is not a step forward for women’s liberation. It is a regressive, misogynist, cynical mockery of feminism to legitimize the draft & include women as cannon fodder. It is not a citizen’s patriotic duty to go to war. It is our duty to oppose every damn one of them.