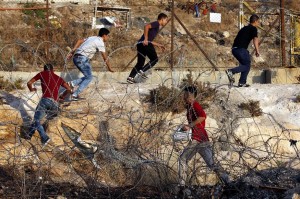 How does Israel come off claiming it’s the only democracy in the Middle East when these young Palestinians from Bethlehem, West Bank have to bypass military checkpoints & climb through a razor wire enforced apartheid barrier for Friday prayers at al-Aqsa Mosque in East Jerusalem? Isn’t freedom of movement an essential part of democracy?

And how can it claim to be a democracy when Israeli authorities only allow entry to al-Aqsa for women & children & deny it to men over 45 years old? Isn’t freedom of religion essential to democracy?

Military occupation, ethnic cleansing, apartheid, carpet bombing aren’t usually features of a democracy. Or does Israel get to rewrite the freedom charters of the great democratic revolutions against feudal tyranny to fit colonialism?