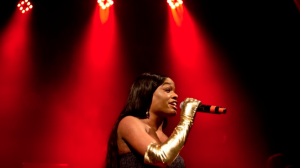 American rapper Azealia Banks rejected appeals to honor the cultural boycott of Israel & crossed the BDS picket line by performing in Tel Aviv last Monday. She is making headlines denouncing the racist treatment she received during her visit to Israel, including being offered money for sex by a rabbi on the return flight. What’s really deplorable about Banks singing in Israel is her complete lack of solidarity with the thousands of African refugees who Israel is deporting & the whole history of Israeli racist policy toward Africans. Not to mention the Palestinians. Banks is in no position to cry ignorance because when BDS appealed to her, she had the resources to investigate & try to understand what was the right thing to do. We know Israeli pays exorbitant fees for performers to cross the BDS picket line & judging from a comment Banks made, money was the deciding element in her decision. She said that despite the racism, she might return to Israel for the right fee. Not a woman guided by principles.

She rejected appeals to honor the cultural boycott by saying “I too live in a country which has issues.” Of course the US “has issues” of which its racist practices & racist wars are paramount. But Banks is being cagey here, not principled, in proffering the same position that Noam Chomsky & Norman Finkelstein hold. Banks was cashing in on apartheid whilst Chomsky & Finkelstein support a cloistered Jewish-only state because they are cynical about the possibility for ending anti-Semitism. If anyone thinks a boycott against the US would be effective to curtail its wars, no antiwar activist could object to that boycott. But the chances of success would be small, partially related to the size & power of the US & its sweatshop relations with other countries. In their struggle against apartheid & genocide, Palestinians called for BDS because it proved an effective weapon in South African’s struggle against apartheid & they believed it would work in their own political & economic circumstances.

There’s another reason why it’s baloney to weasel around BDS by making a comparison to the US. By pledging $38 billion to Israel over the next ten years, the US government is sustaining apartheid & genocide. Part of the work of BDS is getting US schools, factories, businesses, & the Pentagon to sever those academic, scientific, medical, economic & military links to Israel. The BDS campaign very much impacts the US, if not directly then concomitantly but significantly.

Shame on Banks. Build & honor the economic boycott of Israel. Check the label on every product to make certain its country of origin is not Israel.

(Photo of Banks from Haaretz)