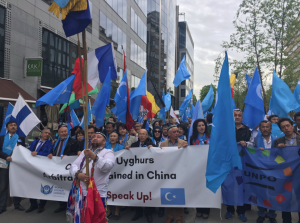 We are beginning to see more reporting & more protests by Uyghur activists in exile over China’s persecution & genocide of the Uyghur Muslim people. Over one million Uyghur are held in arbitrary detainment without due process in concentration camp conditions. Mosques are being turned into propaganda centers & there are systematic attempts to erase Uyghur culture.

It’s likely that without social media we would not know the little we do about the Uyghur struggle for self-determination. But like Palestinians, Kashmiris, & Rohingya activists, Uyghur are taking full advantage of social media to educate about what China is doing to them & how they are resisting. The persecution of Muslims is real & widespread & their resistance more than explains why Islamophobia has become the battle cry of modern day colonizers & genocidaires.
‏
(Photo from Uyghur activist Abdugheni Sabit on Twitter)