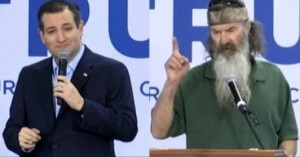 The distinguishing thing about this presidential campaign is that Republican candidates so adeptly combine farce with the politics of fascism. In the process, they make the populist lies of Clinton & Sanders look believable by comparison.

The Republicans are an idiotic redux of the feudal court jester who through puckish humor had license to speak bluntly to the king & didn’t have to kiss ass & grovel like the courtiers. In the profound economic, political, & social crises of our times, these jesters are expressing the views of the US oligarchy who have no solutions to the problems their greed has created & they are currying favor with the bottom feeders in US politics who consider the era of Jim Crow (US form of apartheid), plantations & sharecroppers, female subordination, & persecution of LGBT people as the Golden Age.

It’s hard enough to stomach Trump’s advocacy of torture & aspersions of Mexicans as rapists. Now Ted Cruz suggests Phil Robertson, the Duck Dynasty guy, as UN ambassador. Putting aside that he probably couldn’t do worse than Samantha Power in international politics (meaning pro-war & pro-Israeli apartheid), Robertson is vile in his homophobia & white supremacy. He calls himself “white trash” & in that, it’s hard to disagree.

Robertson isn’t stupid & what’s interesting about his views about Blacks is that they’re familiar to anyone who ever studied US slavery as it was taught in universities (even after the Civil Rights Movement). Were it not for the Civil Rights Movement of the 1960s & the growth of Black studies departments giving Black scholars a chance to correct the historic record, we would still be taught the crap that Robertson, Cruz, & Trump espouse like it was the gospel truth.

This is an example of Robertson’s views about civil rights & why he’s a spokesperson for the GOP & the bottom feeders who support them: “I never, with my eyes, saw the mistreatment of any black person. Not once. Where we lived was all farmers. The blacks worked for the farmers. I hoed cotton with them. I’m with the blacks, because we’re white trash. We’re going across the field…. They’re singing and happy. I never heard one of them, one black person, say, ‘I tell you what: These doggone white people’ — not a word! … Pre-entitlement, pre-welfare, you say: Were they happy? They were godly; they were happy; no one was singing the blues.”

The choice in US politics is farce & fascism versus the same politics in populist disguise–making the presidential campaign another episode of Duck Dynasty.