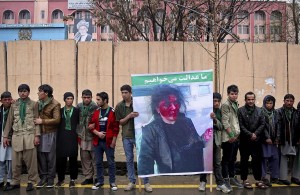 It appears the entire shabby edifice of US-NATO war propaganda against Afghanistan is crumbling after the brutal murder of Farkhunda. Media accounts of what exactly happened are still mangled but what is emerging is growing public outrage at the police for standing by while she was beaten to death & not doing one damn thing to stop it. Thirteen cops have already been suspended & face questioning for their role. And the collusion goes all the way to the top: the government had to fire the spokesman for the police in Kabul after he endorsed her murder on Facebook. Such a brazen, public act by a police official speaks volumes about what the government thought it could get away with.

Hundreds of protesters, men & women, marched in Kabul demanding the government fire & prosecute all the cops & officials involved along with the 19 perpetrators already arrested. It appears the murder has ignited fury over a whole range of war issues facing Afghans. The head of a leading women’s group among the protesters said “We are getting fed up. The new generation has known nothing but war, they are not educated, & now they have no jobs.”

Despite war propaganda, this is not a lineup of perpetrators but protesters demanding justice for Farkhunda. Our fullest solidarity with them & deepest respect since standing up against the Afghan government is standing up against the repressions of US occupation. And that’s a pretty scary thing when the US operates one of their torture prisons in Afghanistan.